Parking: Free parking is available in the town centre 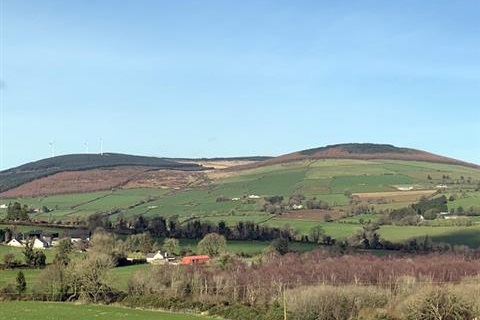 This is a scenic peaceful looped walk around the Clody Valley, sided by the Blackstairs  Mountains with Mount Leinster itself as the focal mid-point on the loop. The loop meanders beside farmland, forestry, streams and open mountain. From Droim Cria (the slate quarry), Blackrock Mountain, Mount Leinster, Kilbranish Windmills, New Deerpark, John’s Hill, Clonmullen and Barkers Road you get many different views of the whole Clody Valley with the Blackstairs Mountains to the west, the Wicklow foothills to the north and the Wexford coastline to the east as you return.

The slate quarry at Droim Cria on your left where slate was quarried for over 100 years to roof houses, both local and far afield – you will spot some houses and sheds roofed with local slate along the route. Turning right, Blackrock Mountain is to your left, while every gateway on the right opens to spectacular valley views towards the wind turbines, Deerpark and Johns Hill. As you walk from County Wexford towards County Carlow, Mount Leinster comes into view on your left. At the summit of Mount Leinster, Labraid Loingsech is said to have been buried. He was one of the first Kings of Leinster (3rd century BC). Legend says he gave the name Laigin (Gaelic for Leinster) to the province from the Spears of the soldiers he brought from France to regain his Kingdom. Saint Columbanus an important 6th century Irish saint was born near the Nine Stones.

There is a large herd of deer in the Clody Valley, originally all were in the northern slopes of the Deerpark, but recently they have flourished in the Coilte forest of New Deerpark. There are incredible sunrises and sunsets to be enjoyed. You will need your camera out for the entire walk as there is plenty of beautiful landscape to photograph.

Ascent: Rising to 180m
(with some long steep climbs) 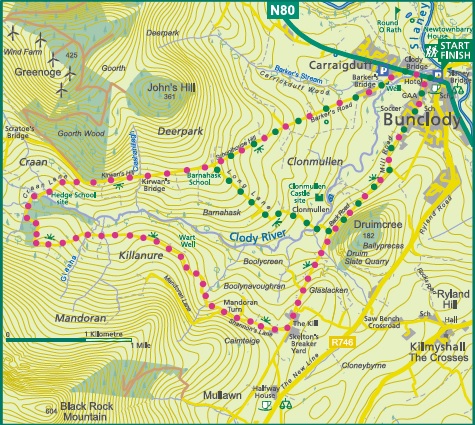 Bunclody is on the N80 just 21km from Enniscorthy and 30km from Gorey.