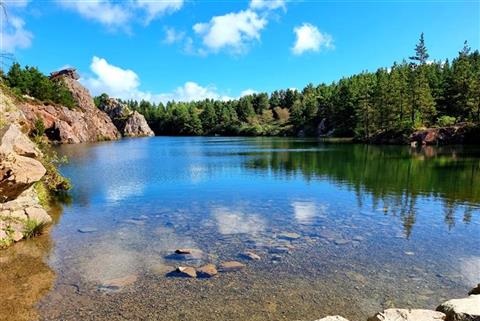 This area of Forth Mountain has a long history of stone quarrying. In the early 1900s, Wexford County Council began to use the area as an official quarry to produce stone aggregate for the construction of roads and other public projects. Many local men were employed here over the years. Stone was broken by hand in the early years and drawn away by horse and cart.

In 1979, the quarry was leased by Wexford County Council to Roadstone Ltd, who planned to scale up stone abstraction. There were planning objections to the scale of development and the issue was eventually decided in the High Court. Planning conditions were imposed requiring preservation of the north facing slopes of Windgap Rocks. These and other developments reduced the commercial viability of the quarry and in 1984 quarry operations ceased at Carrigfoyle. In the years that followed, the excavated pit filled naturally with water producing the beautiful lake we have today. Trees also spread across the surrounding ground area, adding to its natural and scenic beauty.

One of the viewpoints is on Windgap Rocks, which served as a rebel look out post during the 1798 Rebellion. On the 30th May 1798, a Crown force column was spotted enroute to Wexford Town. The famous battle that ensued on the lower slopes was known as the Battle of Three Rocks, resulting in the Rebel Army’s decisive victory. You can continue downhill to the battlefield site or re-join the main Trail back here.

Gates/Stiles: Chicane stiles in place at intervals along the trail 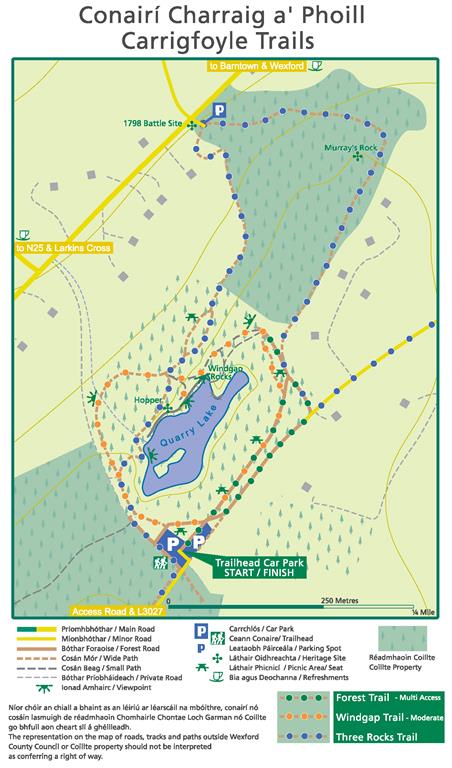 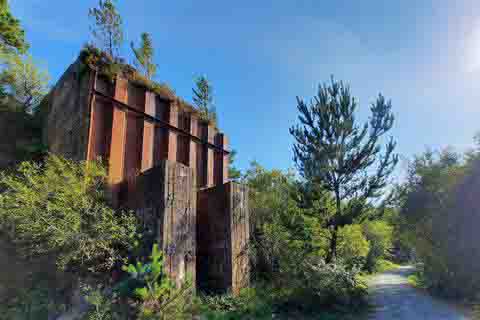 From Wexford town: At the New Ross Road roundabout (Maldron Hotel) take the N25 towards New Ross. After approximately 1.5km turn left into Barntown, then follow the road around to the right and continue straight on. After 1.7km you will come to the 1798 Battlefield car park on your left. The car park is at the base of the hill. There is a steep slope up to the trail. To join the trail at the top of the hill, continue for another 1.2km, turn left, after 700m you will come to the Carrigfoyle Lake car park entrance. There is parking from the entrance along the road down to the main car park which you will come to after 500m.

If approaching from the R733, the New Line Road, turn at the Mountain Bar onto the L3027 and continue for 2km up over the hill until you come to the car park entrance which will be on your right.

Nearby on Wexford Trails